The Cost of Car Ownership

No matter how long you’ve been driving, it can feel like you’re paying an arm and a leg when you come to renew your car insurance. In fact, car related expenses often seem steep – a routine MOT all too often becomes a long list of repairs and coupled with tax, fuel, oil and washer fluid the bills always seem to add up.

We’ve decided to dig into the data to find out exactly how much people from around the UK spend on their cars and how much of a dent this makes in the average salary. What’s more, we’ve explored if we’re getting value for money on fuel and parking, as well as where the government’s money is being spent on roads. 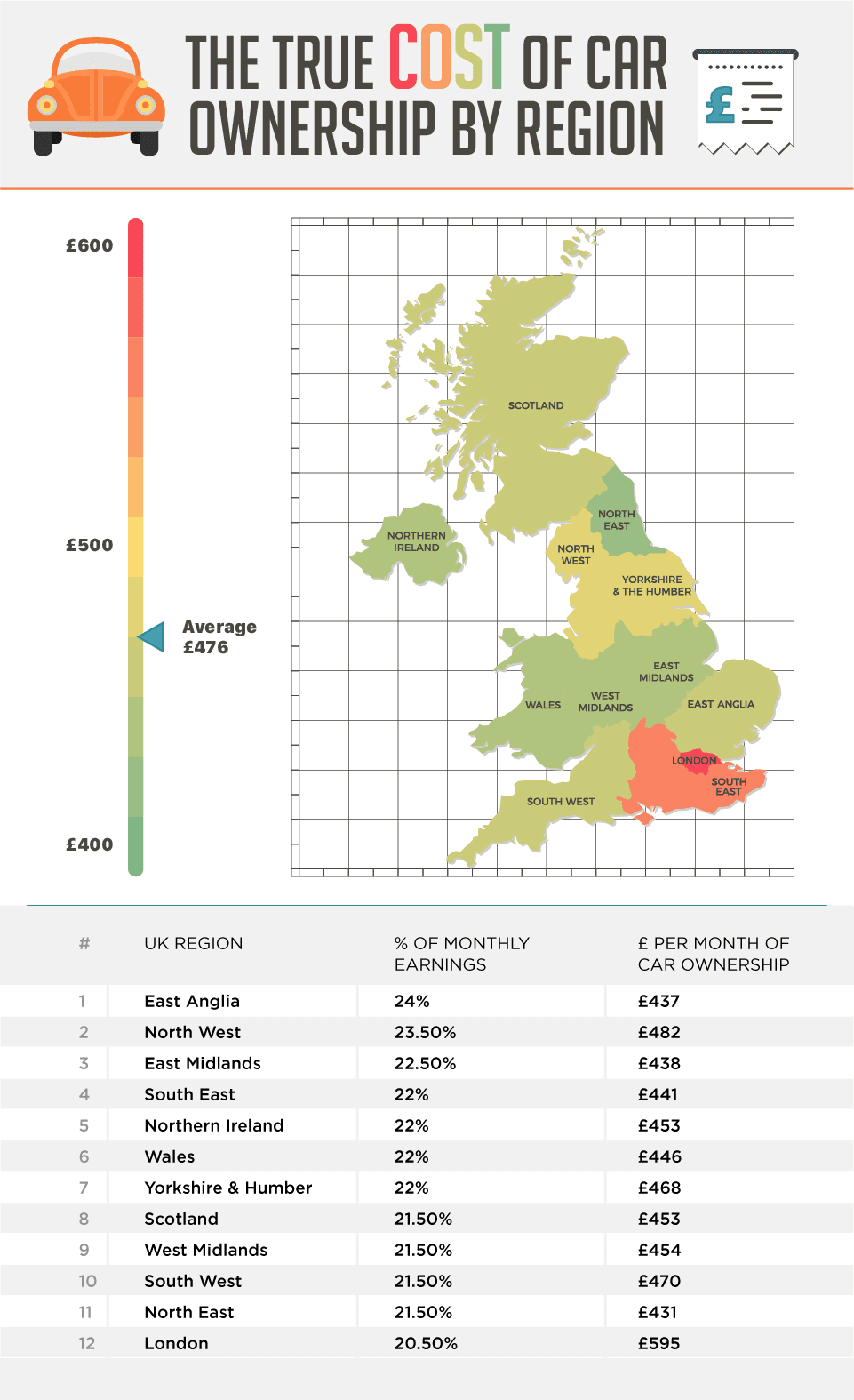 When all aspects of driving are considered, including car purchase, upkeep, fueling, and representative parking, it’s London that has the undesirable privilege of topping the leaderboard as the most expensive area to own a car. The North East comes out as the cheapest place to own a car, with costs on average 39% cheaper than in the capital.

However, once we consider the average wage for these regions, a different story is painted. Whilst owning a car in London costs the most, relative to the higher wages London offers it’s in fact the most cost-effective place to drive. East Anglia and the North West fare fare worse (pun intended), with up to 24% of an average salary going towards the cost of owning and running a vehicle.

So how does this cost impact our standard of living? If we consider just the government figures for motoring upkeep (excluding parking costs), plus average comprehensive insurance figures from Confused.com, motoring costs work out as taking up 19% of an average person’s yearly wage after tax. Another way to put this, is that for every £10 we earn, £1.90 goes towards keeping our cars running.

So how are the government looking after our roads, bearing in mind the money we’re spending on being able to drive on them? The South East is the region which has the most licenced cars, but it’s interesting to note that per car this isn’t reflected equally by government spending budgets. Instead, the figures show that more budget is spent on keeping North Eastern roads in tip-top condition, despite this region having the second lowest number of cars in the country.

Maybe unsurprisingly, it’s bad news for parking if you live in London! Perhaps due to the large number of vehicles commuting into the capital for work, London has by far the most expensive parking in the country. The most expensive Soho parking space will set you back over £8000 a year. In some cases this means it may be cheaper to rent a room in the capital than owning a parking space! When it’s cheaper to rent a room in London than park, you know things are bad.

At least we have some cheap petrol in the UK though right…? Well not exactly, but it certainly could be worse! Eastern Europe comes out as the area with the cheapest costs per litre of petrol, largely due to cheaper import taxes and subsidies. The UK falls towards the upper end of the rankings when it comes to petrol costs, but there are a few other countries in Europe showing even higher costs.